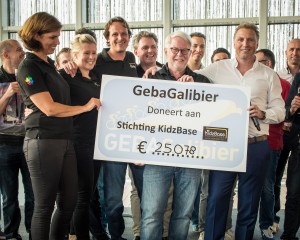 In the evening of June 24th 2014, the ‘Maaspoort’ Theater hosted the closing celebration of GEBA Galibier; a project conceived on a late evening that became the ultimate team building activity. The men of GEBA Trans conquered the Col du Galibier, the infamous 2,645 meter mountain known from the Tour de France. During this ride, our men learned new definitions of both agony and perseverance. But with their minds firmly set on the goal of raising money for children living in troubled domestic situations, they managed to complete their mission. Overseen by the cyclists and their supporters, the sponsors and the board of the KidzBase Foundation, GEBA Trans’s Managing Director and concept initiator Mr. Fred Spijksma awarded the check to Martin Frankort of the KidzBase Foundation.

The crowd reacted with an immense applause when it became clear that the total amount raised exceeded all expectations. No less than the fantastic sum of € 25,078 was written on the check, every euro of which will be spent on the purposes for which it is pledged. “Every dime will be spent righteously! That I promise!” said Martin Frankort. He then continued to compliment the cyclists and sponsors: “This amount exceeded everything we dreamt of. We immensely respect Fred and his ‘golden team’. It truly touches us that the GEBA Trans staff invested so much time, energy and even their own money. I also want to thank the sponsors and friends of the GEBA Galibier project for their generosity.”

The entire project was filmed from the very start by Halo Media Productions, located in Venlo. They will publish a short documentary about GEBA Galibier shortly, while a sneak preview of the climb can already be watched here. It’s a day that cannot ever be forgotten by all those who participated. “The entire GEBA Trans team has enriched its life with this unforgettable experience”, said Fred Spijksma to conclude the evening.

Back to the overview

Dear Stakeholder, As you will undoubtedly know, this past weekend revolved entirely around the…

On July 7th, 2017, GEBA Trans relocated its headquarters to a brand new location,…

Opening new branch office in the Port of Rotterdam